* can't update training time with the usual text at the side
Posted by Innebandy!Co Floorball Club at 2:53 AM No comments:

Let's continue to give our support and encouragement to our new and existing leaders.
Posted by Innebandy!Co Floorball Club at 11:47 PM No comments:

As we draw closer to the prestigious Penang Floorball League next month, Head Coach Sam re-introduced weekly Saturday physical training to help us fine tune and be mentally prepared for Saturday matches as he claimed, players always look ‘stim’ and high on match day (Saturday mornings).

The workouts for the day, 1 warm up lap and 5 laps under 12minutes for guys and 15 minutes for girls. After the run, players were divided into 3 teams and continued with some core exercise. Many struggled to finish what it seems to be an easy exercise but don’t be deceived by the looks of it. Everyone ended their physical challenge with a big smile on their face knowing all the suffering is over.


The coach would like to remind ALL ELITE members to be present at our next physical training this Saturday, 15 December 2012, at Bukit Dumbar 7.30a.m. Attendance is COMPULSORY.

Starting next week, our physical training will be called, "Beat Your Time". More will be explained on Saturday. There will be a weekly reward and a year end bonus reward for those who participate in it. Get excited and be ready to BEAT YOUR TIME.

Yours sincerely,
deswynwan
Team Manager
Posted by Innebandy!Co Floorball Club at 12:58 AM No comments:

Results for top achievers as below:

Due to the nature of this test, form/technique is the most important criteria. The coaching staff has pointed out that majority of players did not performed the fit test with correct form/technique. Thus, all players will be required to RE-SIT this test. We will engage facilitators to monitor player's form/technique in the upcoming fit rest.

Attention to LiveStrong members, please be at RC by 4.40pm. Suit up and warm up.

Tentative physical training slot (may be subject to change)

Please be informed of the new training structure. As for Team LiveStrong members please be at the training venue by 4.30pm. You should be warm up by 4.45pm. Innesanity physical training is COMPULSORY for all players who wish to participate in the upcoming 2013 PFL.

Be prepared to come with Insane Courage because this Innesanity workout will break you and make you cry. I'll be with you and the team will be with you to support you and help you complete the task given. Looking forward for some crazy time.

Thank you for your commitment.

Posted by Innebandy!Co Floorball Club at 11:12 PM No comments:

Congratulations! You have been accepted in team Elite for next year’s league. Keep up the good work and continue to be an influencer and a role model to the junior players.

Congratulations! You have been accepted for a 3months trial with team Elite. At the end of the trials, the head coach will announce whether you would be accepted to join team Elite for next year’s league. Train hard and practice the 7LOVs.

Congratulations! You have been accepted to join team Livestrong. Continue to show your commitment to the club and passion for the game. Remember the 3ICs if you wanna bring your game to the next level.

For those players who have registered with the club but your name does not appear above, please see me.

Thank you for your kind co-operation and continuous support to the club! See you in camp this Friday. Cheers!

Camp is less than 10days away and if you are still unsure of what to expect, you may check the camp schedule at any of the club’s Facebook page. I’ve uploaded it there on Monday. Please bring enough clothes for 3days 2nights which includes sports gears, floorball stick, helmet/suit (for goalie), stationeries, toiletries, towels and yourself.

Do not bring valuable items such as Ipad, Dell, Pandora, Habib. Beats, Rolex, Gucci, Armani, Versace and LV as there might be another group of campers around. However, if you still insist to bring them, please note that we will not be responsible for any stolen/missing/damage item. Only bring your FatPipe, Unihoc, Salming, OxDog, X3M or Excel.

Camp registration starts from 5PM on 14th September (Friday), please meet at the hall (will let you know the name of the hall soon) in Penang Watersports Centre @ Tanjung Bungah. The place is not that huge, so you would be able to find us there. Don’t worry as we will deploy some ushers to welcome each and every one of you there.

You will all be participating and competing in 3 different groups as listed out below. The allocation of team members is FINAL and no changes shall be entertained. However, the committee has the right to change IF we think it’s necessary. Members are distributed based on their leadership skills, floorball skills and social skills.

I’m looking forward for this combine camp and hoping to know each one of you better as we are all one big family. I pray and hope that each one of you would come with an expecting and open heart to learn, smell, taste, feel, experience and enjoy the sessions and the fellowship with all fellow Bandiens. Not gonna be long winded here and I shall see you on the 14th September. =)

If you have any questions you can email me at deswynwan@hotmail.com or call/sms/whatsapp me at 012.5515.205. Thank you.

Posted by Innebandy!Co Floorball Club at 6:36 PM No comments:

On the 26th May 2012, Innebandy!Co celebrated another milestone of their achievements and another year of their existence in the floorball world. Established since 2003, the club is still growing and glowing in it's community.

This year's annual dinner attracted 30 members to join in the fun-filled celebration. There was something new in this year's celebration dinner and it's none other than the InneDraw! 29 prizes were up for grab including an OxDog floorball stick which was co-sponsored by Fidem Sports, 2 Unihoc stick bags, 2 Unihoc water bottles, a Phiten Racing Bracelet, 3 Adidas water bottles, 4 Nike accessories, a Reebok socks, 4 GSC movie tickets, 4 PowerBars, 3 LiveStrong wristband, 2 Sushi King vouchers and 2 Marry Brown vouchers.

Before dinner, 1st round of InneDraw prizes were given out. Indian cuisine from Jaya Caterer was served during the night, with a simple meal of Nasi Tomato, curry chicken, mutton, chinese style fried vegetables and watermelon. Many find the food a little too spicy but overall the food was good and everyone enjoyed it.

Sam announced that everyone are discourage from sitting with their own clicks and were told to mixed around as they will be tested on their knowledge and understanding of a member of the opposite sex later.
After dinner, it was getting to know your teammates session facilitated by Sam, James and Lin Ken. Some manage to answer the questions posted to them and some failed. Unfortunately even during off trainings sessions, push ups were given to those who failed.

A photo presentation of the PFL 2012 highlights were presented thereafter. Creative and imaginary captions done by our very own James Looi tickled and entertained all that were present. It was a sweet journey looking back at the team's effort and journey towards victory. James added that the club's 'Independent Culture' philosophy made them stood out amongst the rest as there were pictures of the team clearing the boards and were told to keep that up.

Our team manager, Deswyn Wan then took the stage and gave a welcoming speech. A little introduction of Innebandy!Co to the newer members were shared together with the 6th law of victory which is, 'Commitment is Unquestionable'. He talked about the importance of commitment towards the club and the fruits bore from this trait. He added, the success of the club was owed to players who have been Innebandy!Co since the beginning and thank their commitment towards to club.

He then continued with the Award Ceremony which was given out by Tabernacle Of Praise's senior pastor, Rev. Gideon Lee. This year, 10 awards were given out to appreciate and acknowledge the effort and commitment shown by the players. Each recipient received a certificate for their achievement. The recipients were:
Next was a short game which never fails to put laughter on everyone's face, the balloon game by Sam. It was guys versus girls, and the loser will have to wash the utensils at the end of the day. The girls were more cool and calm when playing this game, on the other hand, the guys were all crazy and high but weren't that effective, causing them to lose by 3 laps. But it was super hilarious with the things they can do with the balloon.

The finale of the night was the 2nd round of InneDraw,  everyone was hoping to bring that floorball stick back home. The moment came when Deswyn Wan drew the last number and announced the number. It was full of suspense as the number wasn't read instantly. "2 digit number with 0 in it." he cheekily said. And the grand prize winner goes to *drum rolls* ... ERIC WONG! He was laughing hysterically with excitement written all over his face.

Innebandy!Co would like to take this opportunity to thank their sponsors again, first and foremost, Pastor Gideon Lee for opening up the hall, Fidem Sports for co-sponsoring the stick, James Looi on behalf of Wesley Methodist Church for their cash contribution to the InneDraw prizes, Deswyn Wan and Sam Teoh for the Unihoc stickbags, Mr John Jonathan Leong for the Phiten Racing bracelet and Mr Lim Kok Heng for the cash contribution as well. And to the rest who wished to remain anonymous.

We shall see you all again next year for our 10th Annual Dinner.

**Pictures to be uploaded.

Posted by Innebandy!Co Floorball Club at 8:07 PM No comments: 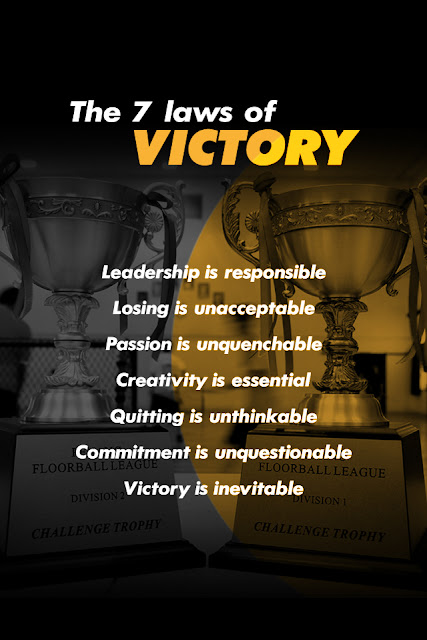 *exclusive for the bandy!co family.
Posted by Innebandy!Co Floorball Club at 9:05 PM No comments:

Finally the Penang Floorball League Division 1 and 2 2012 has come to an end. We would like to take this opportunity to congratulate all teams and players who have won medals and to encourage the rest who did not win anything to try again next year and never give up. Just keep trying.

Innebandy!Co has made history by being the second club to ever win Division 1 and 2 simultaneously. Team Elite led by Captain Kao Lin Ken clinched their second consecutive victory in a comfortable lead ending their campaign with a 6wins-1draw-0lose stat.

In contrast with Team LiveStrong, under the captaincy of James Looi, the team started their campaign losing their first 2 matches. That placed them at the bottom of the table for almost a month but slowly picked up the pace and climbed up the rank till the final game.

The title decider match against Frontliners was a heart pounding, nerve wracking game as both teams were fighting head to head throughout the 3 periods. However, Team LiveStrong's Divesh netted a brilliant goal in the first period and that was enough to secure the team the champions title. 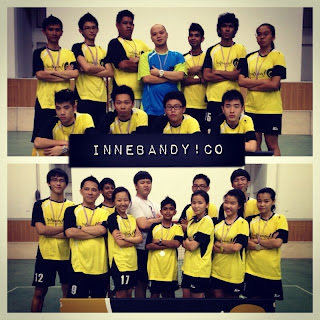 It was a memorable night for the team as 4 players from Innebandy!Co were selected to receive the all star awards namely Sam Teoh (Left Defender), Deswyn Wan (Centre), Bryan Looi (Left Forward) and James Looi (Left Defender D2). In addition, 4 players from Div 1 and 3 players from Div2 are in the Top 10 for point leader. Div1 #2 Deswyn Wan 40points #3 Bryan Looi 34points #6 Sam Teoh 22points and #8 Jason Chew 19points. For Div2 #2 Radin 7points, #4 James Looi 6points and #5 Divesh 5points. Congratulations to all who made it to the point chart as well.  They have again proved to produce high quality players from their club.

The leaders of Innebandy!Co would like to thank all players, parents, family and friends who have contributed directly and indirectly to the success of the club

Posted by Innebandy!Co Floorball Club at 1:17 AM No comments: 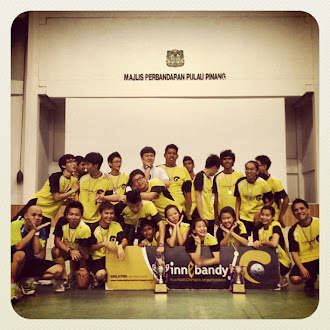 one team one way

visitors from around the world